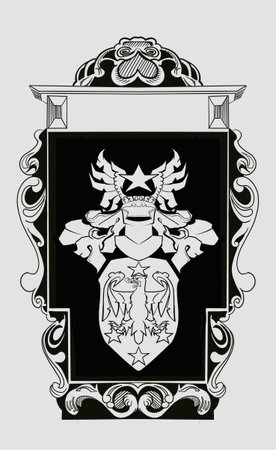 For reference, these are the ranks within the Order:

Unfortunately, no immediate answer was found nor was much published on the official site of the Royal House of Georgia and of the dynastic orders. Many were assuming/guessing but, nothing definitive while more than one person said that there weren’t any official heraldic rules instituted within the Order.

However, I felt that it couldn’t be the case. Especially considering that the Order has an office of Herald of the Order occupied by none other than José María de Montells y Galán, Viscount Portadei and one of the top heraldic experts in Spain. This prompted me to do further research.

In the end, I did find the information I needed by either inferring it or seeing it mentioned explicitly.

First of all, let’s cover the specific privileges of the various ranks of the Order of the Eagle:

This was finally validated after a series of email exchanges with the Royal House of Georgia where it was also confirmed to me that there is a Georgian College of Arms!

Grand Collar of the Order of the Eagle of Georgia
(source: Official site of the Royal House of Georgia)

However, these privileges are not automatic.

As the Royal House mentioned to me in our email exchanges, the privilege is granted after a knight petitions the Grand Master in writing and the authorization is given, also in writing. This is the outline of the process:

1. A formal request for the authorization to display the insignia of the Order with one’s arms needs to be submitted to the College of Arms. The petition includes the blazon of the arms along with any supporting documentation and other information available, as well as an image.

2. The College of Arms reviews the petition and performs an investigation to confirm that the arms of the petitioner are unique and not claimed by any other knight of the Order and meet the criteria of the College.

3. If the arms are found to meet the criteria of the College and, in their opinion, the petitioner is the legal owner of the arms the knight is invited to request to have his arms officially registered and confirmed with the College.

4. Once the process of registration with the Georgian College of Arms is completed, then and only then is the written authorization to display the insignia granted. A signed document with this permission is mailed to the knight and a duplicate is kept in the Royal Archives.